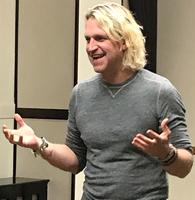 Work creatively with Bob Cline in this 4-week workshop and hone your musical theatre audition and cold reading skills! Each week Bob will work with you to make your material powerful, connected and effective. Present your work to a legit Agent on the final night. Each actor works every class.

Regionally, Bob has had his hands in casting shows at over 30 LORT Theaters, including, The Fulton Theatre, Maltz-Jupiter Theatre, Northern Stage, Cincinnati Playhouse in the Park, St. Louis Repertory Theatre, The Longwharf, The Pioneer Theatre Company, The Olney, Merrimack Rep., Cumberland County Playhouse, Theatre By The Sea, Arkansas Rep., The Marriott Lincolnshire, and many more.

Bob is a proud faculty member, at Pace University, in their BFA Musical Theatre Program, in charge of the senior musical theatre majors. He is also a member of the committee for incoming freshman accepted to Pace.

At Pace, he has directed sold out productions of Cabaret and Bare, Tommy, Kiss Me Kate, Spring Awakening, and this spring’s… Once On This Island.

Bob is also an innovative director who has become well known locally for his many successful productions. All three shows he has directed for the Vital Theatre Company, in New York; Medusa; Bright, Apple, Crush; and Kiss and Tell have been nominated and/or won the Sam French Festival.

Other acclaimed productions include Violet, Songs for a New World, (both nominated, best director, RECT), and A New Brain (winner, best director, RECT), In The Heights, Evita, Parade, Sweet Charity, Nunsense, The Sound of Music, Titanic, Side Show, Godspell, Into the Woods, Little Shop of Horrors, The Full Monty, A Year with Frog and Toad, Falsettos, Assassins, Jesus Christ Superstar, Gypsy, Crimes of the Heart, Company, Rent, Ragtime and his favorite Das Barbecü.

Bob has taught and coached actor’s privately and through the Actor’s Loft for the last 17 years, in NYC.