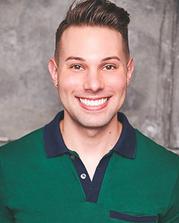 CHAD ERIC MURNANE, CSA, is a Casting Director at Binder Casting working on theatre, television and film. This marks his seventh year in casting. Originally from Florida, he is a graduate of the CAP21 Musical Theatre Conservatory and an alumnus of Interlochen Arts Academy. His training as a theatre performer informs his approach to casting. Since Chad was once on the other side of the table, he is sensitive to creating a warm, friendly and positive audition environment.  He is committed to diverse, inclusive and intelligent casting and has a passion for discovering new talent. His process eliminates artificial boundaries between theatre, television and film.

Chad loves teaching because it gives him the opportunity to nurture actors and empowers them to succeed. Through teaching he helps them learn from the mistakes that he sees every day in the audition room. Additionally, he helps actors identify their individual strengths to ensure they understand how to make the most of an audition opportunity. Chad is a proud member of the Casting Society of America and Teamsters.

Meet and work with Chad Eric Murnane on your musical theatre audition and learn how to make your piece powerful and effective.  Each actor will perform their "go-to" audition piece and receive feedback and direction from Chad then perform again.  Make this important connection with Chad and Binder Casting, casting for Broadway, TV/Film and Regional Theatres.

"I am a Casting Director at Binder Casting and a musical theatre addict. Originally from Florida, I graduated from the CAP21 Musical Theatre Conservatory and I am an alumnus of Interlochen Arts Academy. I provide casting for theatre, television and film. I am committed to diversity, inclusion and intelligent casting and have a passion for discovering and fostering new talent. My casting process eliminates artificial boundaries between theatre, television and film." - Chad Eric Murnane